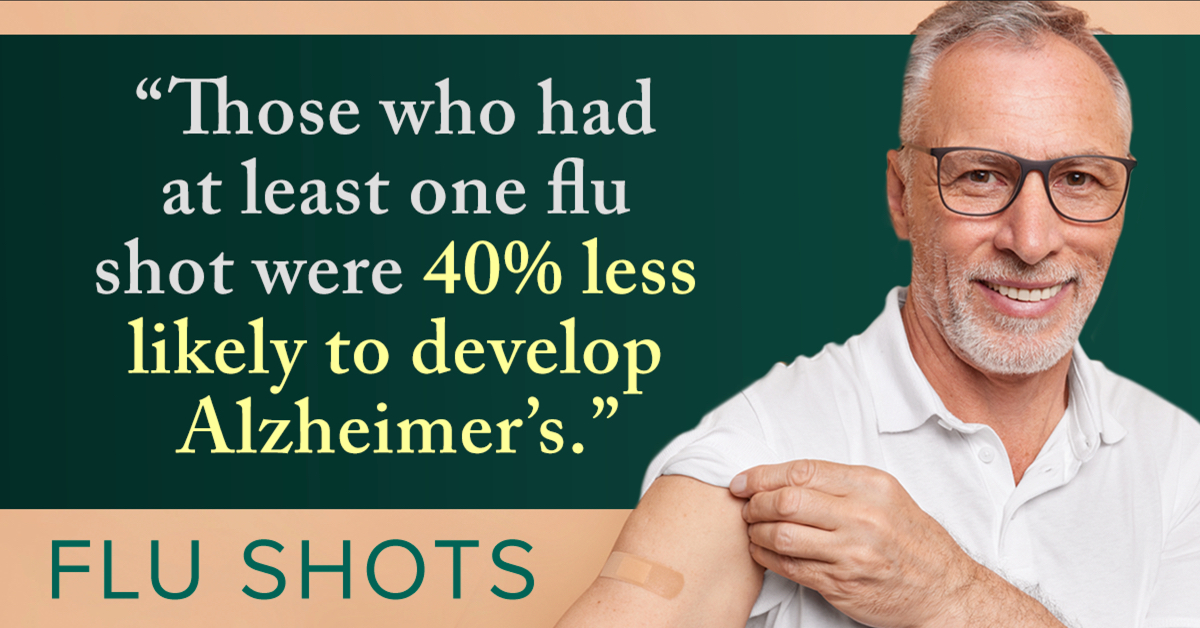 Could a yearly flu vaccine help prevent Alzheimer’s disease? According to a new study… the answer is, yes.

Researchers analyzed data from nearly 936,000 patients age 65 and older who received a flu vaccine and an equal number of individuals who did not. They found that, over a four-year period, those who had at least one flu shot were 40 percent less likely to develop Alzheimer’s disease than those who were unvaccinated.

“It might be that by preventing the infection or reducing the severity of infection, we’re mitigating the damage that influenza can cause in the brain – especially in those 65 and older,” said the study’s lead author Dr. Avram Bukhbinder. “An interesting piece of this puzzle is that it’s not just the influenza vaccine that seems to have this protective effect on Alzheimer’s and other dementias. Other vaccines that adults typically receive – like tetanus, diphtheria, pneumococcus and shingles also are associated with a reduced risk of Alzheimer’s. However, it’s not quite as strong as the link we found in this study.”

During four-year follow-up appointments, Bukhbinder’s team found that about 5.1% of flu-vaccinated patients developed Alzheimer’s disease. Among the non-vaccinated, that number was 8.5%.

“What we think might be happening is the influenza vaccine might be changing the immune system such that its response to Alzheimer’s proteins makes them not as damaging to our brain,” he said. “I think this is another compelling reason to get vaccinated against influenza. It’s not a guarantee that it’s going to stop you from getting Alzheimer’s, but it really seems it’s adding to the compelling nature of the vaccine.”

Beyond Alzheimer’s and other dementias, experts from the Centers for Disease Control and Prevention (CDD)say flu vaccine may also lower the risk for developing some cardiac issues – especially for people with heart disease. It’s also been associated with reduced hospitalizations that arise from complications related to diabetes and chronic lung disease.

The CDC recommends that most people six months and older get a flu vaccine every season. This year, health officials are urging older adults to opt for a high-dose version of the shot to boost protection.

For more information about the flu vaccine, talk to you doctor or visit cdc.gov